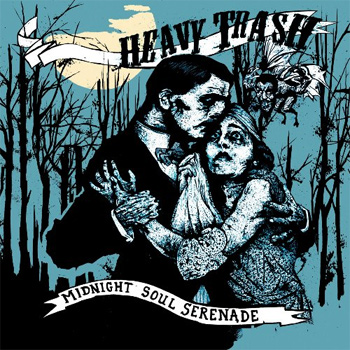 On stage and in the studio, Jon Spencer has destroyed and rebuilt American roots music with such ferocity and wild abandon it’s hard to believe that there is anything left. The trail of musical destruction in the wake of his groovy hate-fuck combo Pussy Galore still smolders with the stench of avant punk trash and nasty garage ooze and grind, while his towering work with the Jon Spencer Blues Explosion remains an indelible totem to his enormous mojo spirit and red-hot power of deliverance. He is Daddy Boss Hog, the Blues Exploder, Microphone Destroyer and a Gibson Brother! The man who shared a Chicken Dog with Rufus Thomas, got Soul with R.L. Burnside, and enjoyed a greasy Lap Dance with Andre Williams! He is ‘The Man Who Loved too Much!!!’ Now, with his pal Matt Verta-Ray, he has become Heavy Trash, and is inviting you to their Midnight Soul Serenade.

Matt Verta-Ray grew up in the loving arms of left wing parents who would take him to folk and blues shows long before he sprouted sideburns. (His mother passed away in the ’90s, still angry that Dylan had gone electric, despite the fact – Matt is quick to point out – that she owned tons of Sun rockabilly 78s, which he very gratefully still has.) In the late ’70s, young Matt found himself one of only twelve people who went to see Bo Diddley at a Canadian fairground. After the show, Bo came out and preached to Matt for an hour about the dark secrets of rock’n’roll. And the rest, as they say, is history – from sitting on the edge of the stage with Bo, to thumping bass for Madder Rose, and then onto his hard-wired decontructionist rootsabilly band Speedball Baby, where he developed his slashing-dagger guitar style – to forming Heavy Trash with his friend Jon Spencer. Matt is also the mad scientist behind the jungle of tube amps and old-school echo machines that form the mutated nucleus of his analog cave – world-class recording studio NY Hed – where musicians come from all over the galaxy to learn the dark secrets of the Midnight Soul Serenade.